When first adapting to an ancestral way of eating, bread was hard to kick, in all of it's variations - the croissant, the whole wheat loaf, the multi grain bread, the tortilla....  All of them were so integrated into my daily diet that it was very hard to break that reliance on their ease of use.

I started researching alternatives, and found a lot of home-made nut butter bread recipes.  Most of them seemed to consistently promise a loaf that was about 2 inches high, and while that might work for side dishes, I was looking for more of a "loaf" like experience.  Then, I began to hear about Julian Bakery's Paleo Bread (http://www.julianbakery.com/bread-product/paleo-bread-almond/?gclid=CPLMoJvV2bcCFSJqMgod-msABw) on some of the Paleo sites that I visit, and I was excited.  But, it was EXPENSIVE!  Definitely not for the frugalista's among us.  Still, I was interested, but had not known anyone that had personally tried it, so was unwilling to spend money on an unknown.

I was overjoyed when I saw that Paleo Nick had written a review of Julian Bakery's Paleo Bread.  Finally!  An opinion I trust!  He was not thrilled with the product, and I was disappointed at the thought that my bread search may never be fulfilled.  Here is his review... (http://paleonick.com/articles/The-Paleo-Bread-Review)

Then, when I was in Cooks, I finally gave in and bought two loaves.  I had been wanting to try it for ever, and I justified the purchase by telling myself that I was going to do a personal and in-depth taste test once and for all.  I am grateful that I did.

Reading the reviews set my expectations low, and I think that helped me to be pleasantly surprised when I did find ways in which I could use the bread that I really liked.

Size - these slices are small.  For some perspective, I took out a rewritable disk and put an end slice and a middle slice next to it.  Then, on top of it. 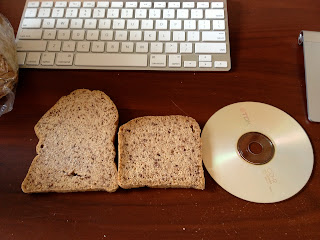 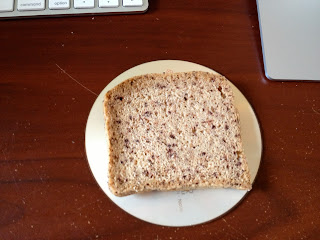 The slices from the end of the loaf did not even cover the disk.

The slices in the middle of the loaf are significantly larger than the slices on the ends. 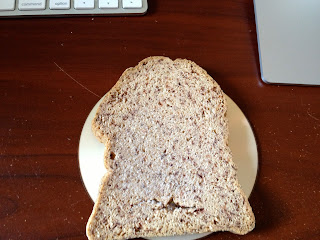 The loaves themselves are small.  I can palm pretty much the entire thing, and I have small hands.

For the sake of scientific experimentation, I bought both kinds of Paleo bread, The Almond Loaf and the Coconut Loaf.. 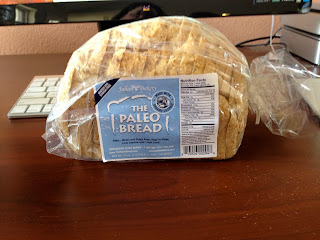 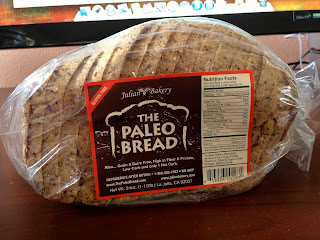 The Almond loaf brings to the table a nutty flavor that will compliment some dishes, but will fight for supremacy with some other flavors.  Tuna Salad sandwiches on the almond loaf are downright unsettling in flavor.

The Coconut loaf is a more neutral flavor.  Kind of like tofu, it blends with whatever you mix it with.

If eaten directly from the bag, the bread has a foreign paste-like mouth feel.  It is kind of gross, not going to lie.  It is strictly dumb luck that I decided to try my hand at Paleo Croque Madame's before anything else, and that the recipe turned out quite beautifully...  (http://paleoonthecheap.blogspot.com/2013/03/not-really-paleo-but-paleo-fied-croque.html)

After trying a sandwich on bread directly from the loaf (and being kind of grossed out), I remembered that the texture was different in the Croque's, and attributed it to the fact that the bread had been toasted.  It was too late to try toasting that set of bread - mustard had already been applied - but I salvaged the innards of the sandwich and transferred them to some nicely toasted slices.  It turned out well.  I had to add some mayonnaise for moisture, since the amount of mustard necessary to make the bread not seem dry would have been off-putting.

If you use Paleo Bread for straight sandwiches, I would highly recommend toasting it so that the mushy/foamy texture dries off.  The bread has a spongy texture that is unusual, and it also pairs better with wet sandwiches.  Egg salad, tuna salad, etc..., because it is surprisingly dry for a slice of bread that is texturally so soft.

The end result was good and flavorful! Spinach, leftover Swai fillet, and tomatoes on Almond loaf with mayo and mustard.  Mmmmm! 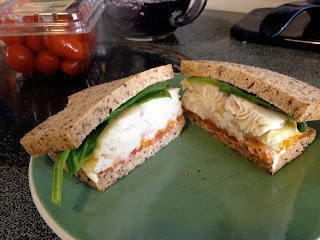 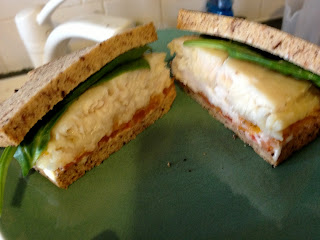